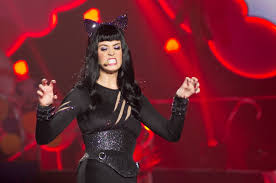 Flo Rida’s hit single started strong at No.1 on the charts along with the start of year 2008, and by the time it was Katy Perry’s turn at the helm all hell had broken loose and people were well and truly crying for mommie, I guess kissing girls were not very good for the economy.  We are talking about the infamous GFC, a term that has successfully transferred from a noun to a verb as in ‘I was GFC’d up the A’ as a few Boomers have been heard whilst articulating their financial surprises in later life.

As it is the intent with our ‘Crash Courses’ we will put the data through the Viracocha (long for Vira) treatment and analyse the result.  The context of the Global Financial Crisis is -I think- very well known, but I will do a brief story-telling here for the sake of grounding our post.  This is mostly Wikipedia btw.

The U.S. stock market peaked in October 2007, when the Dow Jones Industrial Average index exceeded 14,000 points. It then entered a pronounced decline, which accelerated markedly in October 2008. By March 2009, the Dow Jones average had reached a trough of around 6,600.
IndyMac went down first, it filed for Chapter 7 bankruptcy on July 31, 2008. Initially the companies affected were those directly involved in home construction and mortgage lending such as Northern Rock and Countrywide Financial, as they could no longer obtain financing through the credit markets. Over 100 mortgage lenders went bankrupt during 2007 and 2008. Concerns that investment bank Bear Stearns would collapse in March 2008 resulted in its fire-sale to JP Morgan Chase. The financial institution crisis hit its peak in September and October 2008. Several major institutions either failed, were acquired under duress, or were subject to government takeover. These included Lehman Brothers, Merrill Lynch, Fannie Mae, Freddie Mac, Washington Mutual, Wachovia, Citigroup, and AIG.

In a dramatic meeting on September 18, 2008, Treasury Secretary Henry Paulson and Fed chairman Ben Bernanke met with key legislators to propose a $700 billion emergency bailout. Bernanke reportedly told them: “If we don’t do this, we may not have an economy on Monday.” The Emergency Economic Stabilization Act, which implemented the Troubled Asset Relief Program (TARP), was signed into law on October 3, 2008. I really loved Paul Giamatti’s portrayal of Bernake in the 2011 movie ‘Too big to fail’; and it is accurate to say that it was a dramatic moment when he said the “I have studied the crises in America” and then closes with “There will be no economy.” And the music in crescendo and all of that. So bring the 700 billion! Now I enjoy a good conspiracy theory as much as the next guy but I am NOT suggesting anything Ok? But it is to note that between the 15th and the 19th of September (5 trading days) there were an excess of twenty-five million shares traded in the DJIA, whereas the average had been at about 2 million per day, specially on the day after that meeting there were 6 million trades, nice.

Events though the Viracocha spyglass 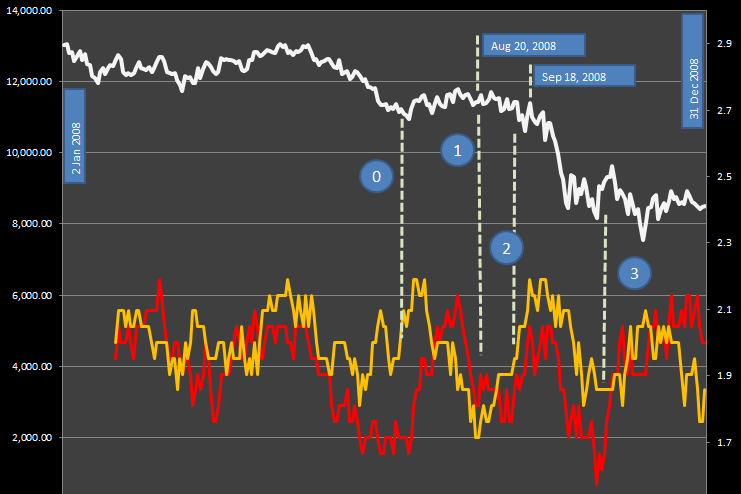 This one was bit tricky since there was some bizarro-world backwards stuff happening between Event2 and Event 3. But I think there is an explanation for that behaviour as we will see.

Event 0. July 17. This is a get in signal, I placed it here because it is when the price (DJIA Points) curve goes back to expected variability after spending some time in the bottom there, but as with most cases it is actually an area (a Buy area in this case) that extends for a period of time.

Event 1. August 20. This is the last chance to get out, it is actually a ‘pretty please exit now!’ kinda scream. This is because not only the DJIA points peaked, but also both volume and points start to follow each other, in this case it is a classical ‘looking for the bottom’ scenario.

Event 2. September 12. This was a conundrum for me to shed light into. In one sense both volume and points are following each other upwards, so we should be looking for a ceiling right? Well I was proven wrong here, but my only saving explanation is that there were huge forces (to the extent of 700 billion huge) trying to steer the market. So the bizarro-world thing here is that there was no ceiling to go to, it was more like a plateau created with lots and lots of cash. As we can see the volume rose steadily as I would assume the banks under duress were moving shares like it was going out of business – wait… they WERE going out of business! But the DJIA points couldn’t be lifted high above the 2.0 mark, and then volume raises even more, and then the ass falls out of it.

Event 3. 28 October. It is over, well Vira is actually doing its job and saying that there is opportunity to go in as the DJIA points dipped so much, but I feel that it is safe to conclude that we were in a ‘wait and see’ kind of scenario by then.

The big takeaway message on this Crash Course is that when both volume and index (or price) are following each other either upward or downwards then there are changes at play that may lead to conclude that the market is looking for a ceiling or a floor… or that Paul Giamatti has spoken.

Gain clarity in the next 60 seconds.

We Would Love to Hear From You

Send us a Email